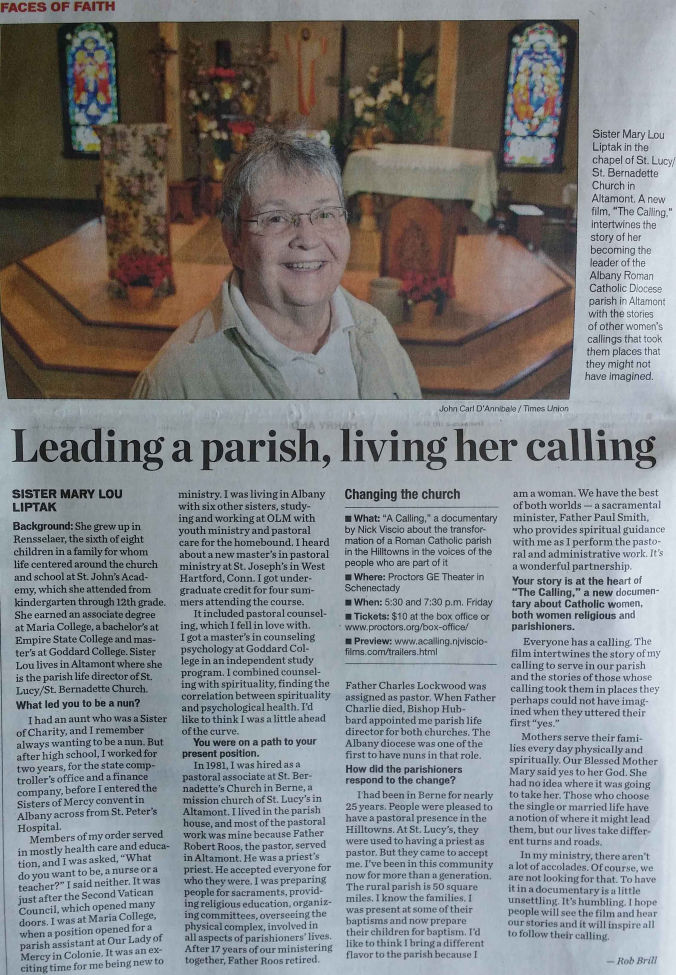 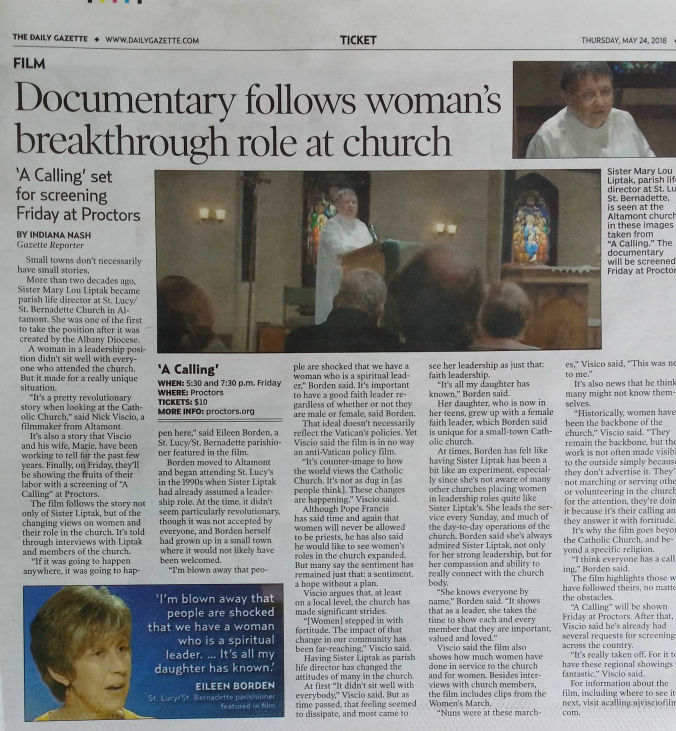 The Daily Gazette by Indiana Nash

Altamont, NY May 8, 2018 - "A Calling ", a film produced in the Capital District, provides a contradictory example of the social images of Catholic women and their Church. “This is a powerful untold story that will change your perspective of women in the Church,” says Nick Viscio writer/director. “Since the establishment of Parish Life Directors by the Albany Roman Catholic Diocese these women have been leading, but are seldom held up, as the prominent example of the change that they represent. Our film looks at one of these stories and explores the far reaching impact of that change, as it echoes beyond the halls of the church. ”

Synopsys - Focusing on the occurrences that brought a nun into the leadership of a small parish in upstate New York, "A Calling “ chronicles the personal stories of several individuals that were engaged in this transformation and how they and their community evolved through the process. As the church works to piece together this new vision, several women parishioners discover a parallel between their lives and those of the women religious of the church that is rooted in their feminist core. This example, along with the historic and present day social justice efforts of women religious, provides an untold story of persistence and fortitude, a component of the grassroots efforts in today’s women's movement.

The Filmmakers - Nick Viscio is a veteran filmmaker whose past accomplishments include feature, educational and commercial productions. As a parishioner at St. Lucy/St. Bernadette’s Church in Altamont, Viscio decided to base the film on his hometown example and spent the past three years producing the film along with his wife, Marie. “This is not a counter-Vatican policy film; it’s simply a story about what’s going on right here. Sometimes the best stories are right in our backyard and just haven’t yet been told.”

Filmed in the Capital District - “A Calling” was filmed at St. Lucy/St. Bernadette’s Church in Altamont, NY and at several other locations in the Capital District including the New York State Capitol. Scenes from the Albany Women’s Marches of 2017 and 2018 are also included in background footage. The story narrative in the film is done entirely in the voices of the people who lived it. "A Calling “ is a feature-length documentary, one hour and sixteen minutes in duration. There will be two screenings on Friday May 25, at 5:30 and 7:30 pm at Proctors GE Theater in Schenectady, NY. The film producers will be present to dialogue with moviegoers after each film screening. Tickets are available online at www.proctors.org/box-office/ or at the box office.